Most people would not place me in the category of “risk taker.” I’m remarkably satisfied on the non-moguly/un-powder filled blue and black runs when we ski, I wear a life jacket when in a boat, and I always carry my flashlight at night in case of mountain lions.    But sometimes, I like to live life on the edge.  You know –  do crazy things like play my horn without warming up, drive my car for days with the “fill gas light” on, or most recently – buy an orange coat.

No, seriously.  This is big.   As a red-head, wearing the color orange is akin to eating lutefisk. Doable, but not recommended.  But orange coats are what happen when you’re faced with crazy sale prices at the CO Ski-Expo. It’s a killer coat – the perfect weight down AND it has a hood (be still my heart), so I’m embracing the orange, like the wild woman that I am…

In addition to the death-defying wearing of the orange coat, I found myself taking a walk on the wild side this Christmas.  The hand-made gift plan started with two hats for my favorite girls – my nieces, Sophia & Hadley.  Somehow that very doable plan erupted into six hats, two pairs of fingerless mittens, a cardigan, a dopp kit, and three matching aprons for my secret santa at work.  Completely reasonable…. had I started in September.

The aprons had to come first, due to the school time-line.  When your secret santa says they like “cooking with their daughters,” does one have any choice but to sew up matching aprons?  I didn’t think so.

Since these had to be made during the crazy last week before break, amidst putting on three performances of our 5th grade musical, all while my parents were visiting – I didn’t have time to go fabric shopping… believe it or not.   I dug out an old, failed attempt at a baby quilt – it had an assembled, color-blocked front, and a piece of backing. Perfect.  I used this  Purl Soho pattern (I did a flip-flop with the quilt top, so they’d be able to tell them apart) for the girls, and this one (backing fabric) for Mom. They are simple and straightforward aprons to put together, and I love that the neck adjusts with the waist. Slick.

I took these photos on my classroom floor (beautiful, isn’t it?) before jamming them in a gift bag . 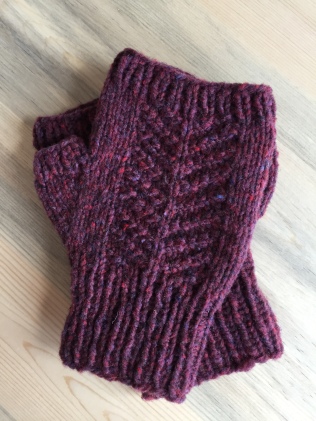 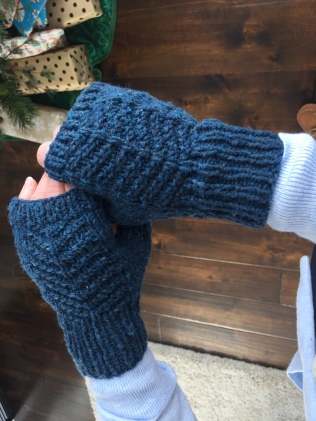 Now, as for all of those hats…

Sophia watched me carefully as I knit away on it all day…  slyly asking who it was for. She was totally on to me.  I wrapped it still on the needles, which she thought was pretty silly.  Fortunately, North Dakota pulled through with a Christmas blizzard that gave me plenty of time to finish on Christmas Day.

Speaking of wrapping things still on the needles… I’ll show you my sister’s hat when it looks like a hat.  There was so little finished she had to ask me what it was going to be.

Now, three plus one does not six hats make.  The brothers’ (my twin nephews Oliver and Axel) hats haven’t appeared yet.  I put the pattern and yarn in the same bag, but alas – the elves must finally be on holiday.

I’m happy to report that the dopp kit and cardigan were actually finished when wrapped – more on those another time.

I’ll admit that my procrastinator’s walk on the holiday-wild-side may not have been the wisest or most stress-free route to take… But making special things for people I love  – totally worth it.

For my next daring adventures I’ll be sewing button holes, and trying to leave for work on-time.

One thought on “On The Edge”